A free one-hour CLE Program with Lawrence Goldstone, the author of "Inherently
Unequal: The Betrayal of Civil Rights 1865-1903". 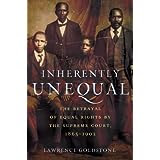 Wednesday, Feb 9, 2011 7 pm
At The Poisoned Pen
4014 N. Goldwater Blvd Suite 101
Scottsdale, AZ 85251
No pre-registration necessary.
Arriving at least 15 minutes in advance to sign in for CLE credit is
recommended.

MORE about the event:
http://pslcpd.blogspot.com/2011/01/free-one-hour-cle-program-with-lawrence.htmlhttp://www.poisonedpen.com/event-calendar/goldstone-lawrence

MORE about the book:
"Comprehensive and remarkably lucid"—Publishers Weekly
"A furious indictment of the Supreme Court as an accessory to the
anti-democratic machinations of Gilded Age elites."—Kirkus Reviews
"One of the saddest episodes in American history has been inadequately explored
and poorly understood—until now. Lawrence Goldstone's brilliantly written book,
Inherently Unequal, traces the post-Reconstruction Supreme Court's slow
strangulation of equal rights for African-Americans. It will be a shock to many
that the judicial branch, viewed in the modern context as the premier defender
of civil rights, was primarily responsible for the nation's descent into a deep,
racist inequality that ruined the lives of millions for a century. As Goldstone
shows us, Lincoln's great legacy was cynically dismantled by the officeholders
best positioned to protect it."—Larry Sabato
No comments:

Email ThisBlogThis!Share to TwitterShare to FacebookShare to Pinterest
Labels: Arizona

Analysis and discussion of selected issues and problems with the proposed amendments to the Texas Disciplinary Rules of Professional Conduct being voted on by State Bar of Texas members.
Special One Hour Ethics Presentation – Free through January 29, 2011

To enroll go to http://www.utcle.org/

EDITTED MARCH, 2012:
This post was written more than a year ago. Since then, the amount of free CLE on the ABA's CLE Now! page seems to have dwindled and you can't use it if you haven't got a paid ABA membership.
If you're looking for free, on-demand CLE you're better off looking at Top 3 Bundles of Free On-Demand MCLE.


ORIGINAL POST:
The ABA'S CLE Now! page offers several free, web-based CLE programs at http://www.abanet.org/cle/clenow/home.html. You'll have to create a login to access them, but that's free too.

Email ThisBlogThis!Share to TwitterShare to FacebookShare to Pinterest
Labels: Web

For the first time, the Illinois Supreme Court has approved and promulgated Illinois Rules of Evidence in codified form effective Jan. 1, 2011.  They are aimed at expediting the trial process and improving the administration of justice in Illinois courts.  Before, the rules of evidence in Illinois were dispersed throughout case law.  The codification contains some changes dealing with opinion testimony and hearsay.


Clifford Law Offices is sponsoring a two-hour free continuing legal education webinar entitled "Ethical Applications of the New Illinois Rules of Evidence." This program has been approved for 2 hours of professional responsibility credit. Our panelists include, The Honorable Donald C. Hudson, Justice of the Second District Illinois Appellate Court, Chair of the Judicial Inquiry Board and Chair of the Special Supreme Court Committee on Illinois Evidence, Professor Stephan Landsman, Evidence Professor at DePaul University College of Law for more than 25 years, and Lawrence J. Fox, Visiting Lecturer of Law at Yale Law School. They will address the rules of evidence in the context of the Rules of Professional Conduct.  The program will explore when the offering of false evidence triggers the rules of professional conduct such as Rule 3.3, when discussing the case with others puts Rule 4.1 into play, how the lawyer must deal with and preserve confidential, privileged and work product protections when offering evidence, and how the gathering of evidence on an informal basis can violate Rule 4.4.  The speakers will explore these issues through various hypotheticals with interactivity from a live audience as well as from those participating on the web.

Click here to register for the February 17, 2011 program: http://totalwebcasting.com/view/?func=RGTR&id=6YQQV83MLM

MORE:
http://www.cliffordlaw.com/continuing-legal-education/2011-webinar-ethical-considerations-on-the-new-illinois-rules-of-evidence/
---
And thanks to Tan Nguyen for alerting me to this program!

MCLE Information: This program has been approved for 2 hours of professional responsibility credit

Email ThisBlogThis!Share to TwitterShare to FacebookShare to Pinterest
Labels: Illinois

This class is designed for practitioners of commercial and residential real estate and addresses a number of ethical issues and potential ethical pitfalls the attorney should be aware of in a real estate transaction. Particular attention is focused on potential conflicts in representing multiple parties to a real estate transaction, the requirement of obtaining a signed engagement letter, using non-attorneys such as paralegals and clerks to attend closings, handling escrow accounts, comingling escrow funds, and escrow account bookkeeping requirements.

This class provides both newly admitted and more experienced practitioners with a comprehensive review of IRC §1031 Tax Deferred Exchanges and the role that statute plays in real estate transactions that utilize this tax deferral strategy including discussions of the statutory history of §1031 Tax Deferred Exchanges, reasons for employing IRC §1031, in-depth discussion of the definition of "like-kind exchange" and its treatment by the IRS, Tenant-In-Common properties, REITs, treatment of vacation and second homes under IRC §1031, forward exchanges, reverse exchanges, and an in-depth discussion of the mechanics of properly conducting a tax deferred exchange under IRC §1031 including required and recommended documentation and the role of both the attorney and Qualified Intermediary in the transaction.

Jan 18/Cleveland, OH - Prop 8 and the Future of Same-Sex Marriage

In November 2008, California voters passed Proposition 8, prohibiting same-sex couples from marrying under California law. In August 2010, a court in the Northern District of California held Proposition 8 violates the Equal Protection and Due Process Clauses of the United States Constitution. This program will discuss the constitutionality of Proposition 8 and the future of same-sex  marriage.

The Northeast Ohio Chapter of the American Constitution Society presents:
Prop 8 and the Future of Same-Sex Marriage
http://www.acslaw.org/chapters/lawyer/neohio/rsvp

This event has been approved by the Ohio Supreme Court for 1.0 hours of free CLE credit
The American Constitution Society for Law and Policy (ACS) is one of the nation's leading progressive legal organizations. Founded in 2001, ACS is a rapidly growing network of lawyers, law students, scholars, judges, policymakers and other concerned individuals. Our mission is to promote the vitality of the U.S. Constitution and the fundamental values it expresses: individual rights and liberties, genuine equality, access to justice, democracy and the rule of law.

For more information about the organization, which has established student chapters at more than 175 law schools around the country, including Case Western Reserve University School of Law and Cleveland State University Cleveland-Marshall College of Law, and lawyer chapters in over 30 cities, please visit http://www.acslaw.org/
No comments:

Email ThisBlogThis!Share to TwitterShare to FacebookShare to Pinterest
Labels: Ohio

TERIS Phoenix CLE course options include:
Two additional course topics in development will focus on:
Each presentation lasts approximately one hour, plus time for Q & A. All options are ethics credit eligible and TERIS provides each participant with a certificate of attendance and written presentation materials.
TERIS CLE courses may qualify for up to one hour toward the annual CLE requirement for the State Bar of Arizona, including one hour of professional responsibility.
To contact TERIS about its eDiscovery and other litigation support services, or to schedule a free CLE with TERIS Phoenix , call Brandon Colburn at 602.241.9333 or e-mail bcolburn (at) teris.com.

ABOUT TERIS
Founded in 1996, TERIS provides legal support and sophisticated eDiscovery solutions to corporate legal teams and law firms across the U.S. and internationally. TERIS' national staff of more than 275 was named one of the top 20 eDiscovery service providers by industry researcher Socha-Gelbmann in 2008. The company operates a free job board for the legal profession at http://www.discoverlegaljobs.com/ and has offices in Seattle, San Francisco, Silicon Valley, San Diego, Phoenix, Austin, Dallas, Houston and Chicago. To learn more about TERIS, visit http://www.teris.com/ or follow the company on Twitter at www.Twitter.com/DiscoverTERIS.
======
MORE:
http://www.sophisticatedlitigationsupportblog.com/2010/12/articles/teris/teris-phoenix-provides-clients-with-most-comprehensive-certified-staff-in-the-local-litigation-support-market/
No comments:

Email ThisBlogThis!Share to TwitterShare to FacebookShare to Pinterest
Labels: Arizona

Columbia Law Professor Tim Wu has been one of the leading voices in the debate over network neutrality. He is a scholar of both copyright and telecommunications law; and, over the years, he has developed some pretty influential views about how legal rules impact innovation. Tim just wrote a summary of his views in the form of pop-press book entitled, The Master Switch: The Rise and Fall of Information Empires.
On this edition of the IP Colloquium, he joins UCLA Law Professor Doug Lichtman to talk about that book, and the ideas it articulates about innovation and competition.

Link: www.ipcolloquium.com/Programs/17.html
The show lasts one hour; it can be streamed or downloaded from the page linked below; and, if you are a lawyer, you might be able to earn free CLE credit just for listening. Visit the Intellectual Property Colloquium for more details.
No comments:

Email ThisBlogThis!Share to TwitterShare to FacebookShare to Pinterest
Labels: Illinois

Suggestions for programs are always welcome and should be directed to the County Law Librarian, who may be reached at 651-430-6330.
MORE:
http://www.co.washington.mn.us/info_for_residents/law_library/continuing_legal_education

Email ThisBlogThis!Share to TwitterShare to FacebookShare to Pinterest
Labels: Minnesota

Jan 12/CLeveland OH - The Memory of Justice: The Unexpected Place of Lviv, Ukraine in International Law - A Personal History

Philippe Sands will discuss the unprecedented contributions of Hersch Lauterpacht, Rafael Lemkin, and Louis Sohn in helping to forge modern international law. Studying and working in eastern Europe in the early 1900s, these three great legal minds together drafted Nuremberg Statute Article 6, the Genocide Convention, and the International Court of Justice Statute.

Additional Information:
Open to the public at no cost. One FREE hour of CLE credit will be available, pending approval, to lawyers who attend.

Please note - Recording in any form is prohibited.

DIRECTIONS TO CAMPUS * PARKING
There is no law school parking, however, public parking, for a fee, is available in the Cleveland Botanical Garden parking underground garage. Also, meter parking might be available.

Speaker Information:
Philippe Sands joined the Faculty of the University College of London in January 2002. He is Professor of Law and Director of the Centre on International Courts and Tribunals in the Faculty, and a key member of staff in the Centre for Law and the Environment. His teaching areas include public international law, the settlement of international disputes (including arbitration), and environmental and natural resources law.

Prof. Sands is a regular commentator on the BBC and CNN and writes frequently for leading newspapers. He is frequently invited to lecture around the world, and in recent years has been a Visiting Professor at the University of Toronto (2005), the University of Melbourne (2005) and the Universite de Paris I (Sorbonne) (2006, 2007). He has previously held academic positions at the University of London's School of Oriental and African Studies, Kings College London and , University of Cambridge and was a Global Professor of Law at New York University from 1995-2003. He was co-founder of FIELD (Foundation for International Environmental Law and Development), and established the programmes on Climate Change and Sustainable Development. He is a member of the Advisory Boards of the European Journal of International Law and Review of European Community and International Environmental Law (Blackwell Press). In 2007 he served as a judge for the Guardian First Book Prize award.

Email ThisBlogThis!Share to TwitterShare to FacebookShare to Pinterest
Labels: Ohio

We invite you to join us for the 15th annual Tribal Law & Government Conference at the University of Kansas School of Law. The conference devotes significant scholarly attention to the study of organic tribal law, modern tribal governments and the evolution of tribal common law, highlighting how the work of scholars and tribal jurists addressing the emerging and historical problems of indigenous law and governance is critical to strengthening tribal sovereignty.

November 4:
* A Country Divided: The 2020 US Elections and the Future of American Politics. By U Minnesota Law.
November 11:
Evaluating Top Concerns About Litigation Finance. By Bloomberg.
November 13:
* Fifth Trade Law Fall Update. By CWRU.
November 19:
* Introduction to Boolean on Fastcase. By Fastcase.
November 24:
* Project Planning & Management for Professional Services. By PFCS.
* Leveraging Technology to Prepare Briefs with Greater Efficiency and Accuracy. By LexisNexis.

December 2:
* Solo and Small Firm Marketing. By The Bar Plan.
December 16:
* Terminating a Construction Project Before Completion: Do's, Don'ts, Claims, & Litigations. By PFCS.
* Tax Relief for Employers and Employees in the Covid-19 Pandemic. By Bloomberg.
December 29:
* Leveraging Technology to Prepare Briefs. By LexisNexis.