EDITORIAL
Part of the internet is "going black" today, to remind us of the dangers of the current form of 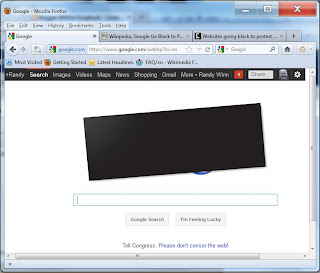 SOPA and PIPA, two proposals in Congress to screw-up the web in the name of protecting intellectual property rights.
Many critics of these bills are people and organizations who know and understand the internet's potential for increasing human knowledge and freedom.
4freeCLE does not do politics, but it relies on a free and open Internet. There are already ways to protect intellectual property rights, and you can learn about them via resources linked to thought Intellectual Property tag, but only if someone hasn't shut down our site because a third party comments on a blog entry with a link to what might be someone's IP.
Thus, this particular issue is of interest to 4freeCLE, and should be of interest to you.
For more information ... the following links may be illegal under SOPA/PIPA since they may link to material that is under copyright. How would I know? How would I be able to give you this site if I had to run due diligence on the current content of a site I linked to in the past?

May 31:
* Legal Writing 102. By Fordham.
* Disability Justice 101: Inclusion for Legal Professionals. By WSBA.

June 1:
* Cyber Law And Cybersecurity Insurance 101. By LexisNexis.
* D&O Coverage Toolbox - The Ins and Outs of Run-Off Coverage. By Cozen O'Connor.
June 2:
* What Is Desktop Underwriter and Why Is It Important for Mortgage Lending?. By CES.
June 3:
* Ethical Concerns - Conducting Research via Open Web. By LexisNexis.
June 7:
* Cultural Competence for Law Firms. By Clio.
June 8:
* Ethics, the Press and your Practice: Getting out there without getting into trouble. By Bloomberg.
* Who Gets to Be an American?. By The Brennan Center for Justice at NYU School of Law.
June 13:
* Barring Candidates from the Ballot: Insurrection, Rebellion, January 6th, and the Fourteenth Amendment. By Extra Mile.
June 17:
* Trends to Watch in Antitrust Law. By LexisNexis.
June 21:
* Doing Business Outside Your State: Foreign Qualification. By LexisNexis, CSC, and Dykema Gossett PLLC.
June 22:
* Bankruptcy Filings: Industries And Patterns. By LexisNexis.
June 24:
* Understanding the Basics of Local Land Use Regulation of Agriculture. By PennLaw.
* The Trademark Modernization Act has been enacted- Now What?. By LexisNexis.
June 29:
* Trends to Watch in Energy Law. By LexisNexis.
* Cyber Security Ethics – Safeguarding Client Data in Today’s Emerging Hybrid Practice. By Alta Pro.

July 1:
* The Little Engine That Could! Celebrating the 20th Anniversary of the Founding of the UN Special Court for Sierra Leone. By CWRU.
July 7:
* Ethics of Stress, Trauma, and Burnout: How to Protect Our Clients and Ourselves. By WSBA.
July 13:
* Using Universal Expert Declarations in Immigration Court. By Center for Gender & Refugee Studies.

Toss In A Dollar Or More - Help me bring you more free CLE listings!